On October 31, 2018, thousands gathered to mark the signing of the September 2018 peace agreement, after more than four years of civil war in South Sudan.

Criticised by some as too costly and premature, a certain amount of skepticism was surrounding the event organised by the government of South Sudan on Wednesday 31st October to celebrate the signing of a ‘revitalised’ peace agreement in September, after more than four years of civil war. Former vice-president and leader of South Sudan’s main opposition group, the SPLM/A-IO, Riek Machar had kept his presence unconfirmed until the last minute.

On Wednesday morning, he nevertheless set foot in the capital. It was the first time since July 2016 and his escape from Juba amidst heavy fighting between his forces and the government’s army. Over the months that followed, regional peace efforts slowly reopened a dialog with president Salva Kiir. A revitalised version of the 2015 peace agreement was agreed upon in August in Khartoum. In September, this agreement was signed in Addis Ababa by the two leaders as well as other opposition groups. 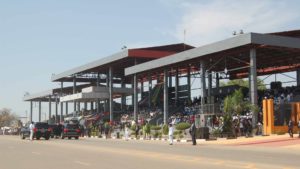 A general mobilisation took place in the capital in the days leading to Wednesday’s celebration. Cars mounted with loud speakers drove around the neighbourhoods and text messages were sent to mobile phones to invite the public to participate. Inmates from Juba central prison joined labourers in cleaning the streets and giving a lick of paint to the side-walks and revive their black and white pattern. Banners calling for peace and unity popped up, showing South Sudan’s leaders side by side in Khartoum. The main venue dedicated to official celebrations in Juba, the John Garang Mausoleum, was refurbished for the occasion.

This is where thousands of Juba citizens gathered on Wednesday. They started to occupy the large space surrounding John Garang’s statue early in the morning and waited under the scorching sun for hours until, one after the other, the most senior guests arrived. 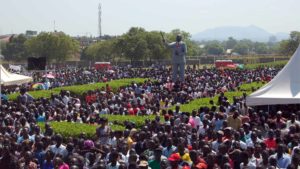 The public arrives at John Garang Mausoleum for the peace celebration on 31 October 2018. 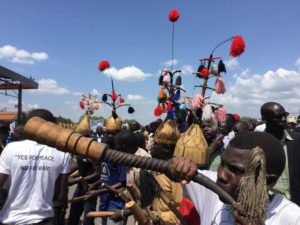 South Sudanese traditionnal performances during the peace celebration in Juba on 31 October 2018.

David Shearer, head of the United Nations Mission in South Sudan (UNMISS), declared that “we could not have believed that this could be possible six months ago” and reminded the audience that “there were still some clashes going on in the country”. He urged the parties to implement the agreement, and added: “It’s my hope that some time in the near future the presence of UNMISS is not needed any more”.

Gabriel Changson declared on behalf of the South Sudan Opposition Alliance that “we recognize that we, the leaders, have made mistakes. We shall work to correct them”.

Riek Machar took his turn at the podium and delivered a speech mainly in Arabic. He praised the efforts of Omar al Bashir: “You have proven the skeptics wrong. You were the first to recognise the independence of South Sudan (…). You have helped us bring peace to our country” he said before extending his appreciation to Yoweri Museveni as well. 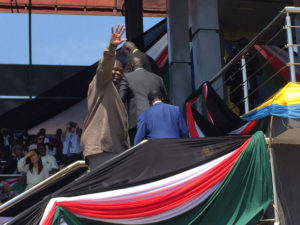 Sahle-Work Zewde, Ethiopia’s recently sworn-in female president, described the celebration as “a truly historic event” and urged “the vulnerable women, the children, the youth, to congratulate the parties for choosing peace and development over destruction”. She asked South Sudan leaders “to keep their promise”.

The president of Somalia, Mohammed Abdullahi, stressed that “this event shows that South Sudan is committed to revitalise the peace agreement”. He gave a testimony on the damages caused by war in his own country. “We know all the horrors of war (…). Meanwhile, the world does not wait. Our country had to catch up. I do not wish the same to our brothers from South Sudan” he declared.

After Omar Al Bashir was granted an honorary doctorate from the University of Juba’s Institute of Justice, Peace and Security Studies – a gesture that many criticised on social media – Salva Kiir took place at the podium. The sun was already falling behind John Garang Mausoleum. 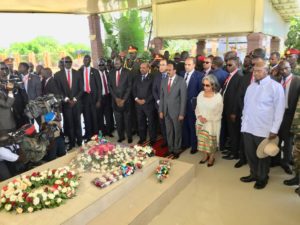 President Salva Kiir joined by other heads of state in paying his respects to the late John Garang during the peace celebration in Juba.

The president offered his apology “on behalf of all leaders” to the people of South Sudan “for the physical and emotional wounds you have endured in this war”. He stressed that “the presence of the opposition today is a strong testimony that war is ending”.

“We know that it was neither an ethnic nor an economic war but rather, a struggle for power. (…) We must apologise to the people of South Sudan. We the leaders must accept the blame collectively and never go back to war again (…) I personally forgive Riek Machar. And I hope that Riek Machar has also forgiven me. Forgiveness is not an act of cowardice. (…). To South Sudanese communities: this war was not your war.” – President Salva Kiir.

The president announced he would instruct security forces to “open all routes in the country and allow people and humanitarian supplies to move freely, effective immediately”. He also announced the liberation of two political detainees: James Gadet, the former spokesman of Riek Machar, and William Endley, a South African collaborator of the opposition leader. Both had been sentenced to death for treason. He finally declared being committed to the National Dialogue process, to reach “an agreement that will settle all the differences for once and for all”.

Time will tell if words will be put into action, and if the South Sudan revitalised peace agreement will indeed bring a lasting peace to the country. The dedication shown by the thousands who stood in the burning sun to attend the celebration until the end sends a strong signal to their leaders. They want peace. 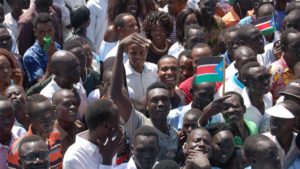 Text and photos by Florence Miettaux